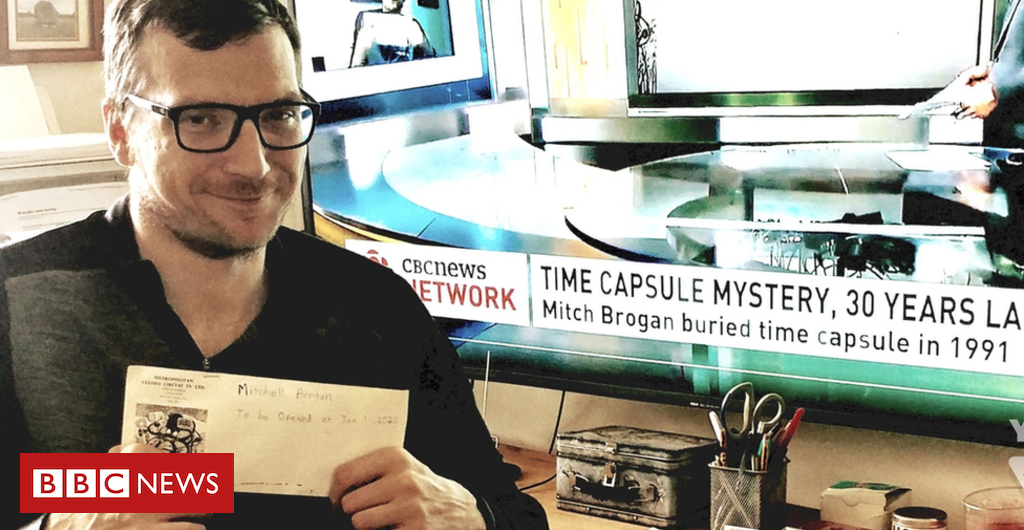 In August 1991, an 11-year-old Canadian penned a brief note to his future self.

Mitch Brogan got the idea from his late grandfather Charles – to answer a list of 11 predictions and seal them up in an envelope until 1 January, 2020.

The letter stayed hidden away in a book in his grandfather’s office until his death in 2006, when his grandson came across it by chance.

He waited to open it as promised until New Year’s Day. So what did he get right about life in 2020?

The 39-year-old from London, Ontario, said he couldn’t recall much about what he’d written in the note. Inside the envelope was a thin, folded piece of paper and an old, ratty Canadian $1 bill from 1954.

But he said when he opened the note, “it all flooded back”.

“Looking at my words on the page, I sort of remember [making] the strokes,” he told the BBC.

At the top of the letter was his childhood address, the date – 25 August 1991 – and a rough map to two other time capsules he and his cousin had buried on their grandfather’s property.

What were his predictions, now nearly three decades old?

He had dire predictions about the environment, imagining a world where none of the rivers and lakes would be clean, and where humans would “infest” other planets and “trash them up like they did to Earth”.

Mr Brogan said he was an “outdoorsy” child who enjoyed cycling and baseball and had the early instincts of the entrepreneur he would grow up to be.

He said that he and a friend made about C$300 that summer by helping neighbours rid themselves of earwig infestations.

The time capsule exercise was the type of thing his grandfather would do, he recalls.

“He was a strong, stern, loving man,” said Mr Brogan.

A commercial diver, Charles Brogan taught his grandson how to scuba dive as well as life lessons that have served Mr Brogan well over the years, including to keep in mind that all life’s experiences are “just a moment in time”.

As for his predictions in the letter, most never came about. He is not married, has no children, and mankind has yet to colonise other planets.

He is neither a lawyer nor a writer but an entrepreneur who, most recently, founded a facility with the mission to help people with mobility impairments gain access to technologies that improve their quality of life.

He also started a company that develops technology and tools for people with reduced mobility.

In 2006, life threw him a curveball. Mr Brogan was hit by a drunk driver and sustained a spinal cord injury that left him quadriplegic.

“After the accident, my entrepreneurship kicked in,” he said.

Mr Brogan hopes the letter is just the beginning in a series of time capsule mysteries being solved. He plans to see if he can dig up whatever he and his cousin buried years ago on his grandfather’s property, if the current owners allow it.

And he is thankful he stumbled across his letter hidden among his grandfather’s books, not long after Charles Brogan died of complications from Parkinson’s disease.

“You think things get lost with time, just like everything else,” he said.