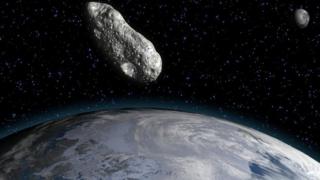 In the space of two days, two large asteroids will have passed by Earth.

On Sunday a piece of space rock the size of Blackpool Tower shot past our planet, moving at a speed of eight miles per second.

At that speed the asteroid could’ve travelled from London to New York in just over seven minutes!

Although the asteroid known as 2010 FR was at a distance of 4.6 million miles away – that is still close(ish) in space terms.

Nasa has classified the rock as a Near-Earth Object (NEO) and says the asteroid is “potentially hazardous”, meaning one day in the future its orbit could see it move closer to a collision course with the Earth.

That might sound scary, but there are lots of asteroids that Nasa constantly monitors which are classed as hazardous. However, the chances of them hitting Earth are still very small.

And Nasa also has a plan to knock any pieces of space rock that could hit the planet, off course.

Asteroid 2010 FR isn’t Earth’s only close encounter with a chunk of space rock this month.

On 8 September, an asteroid known as 2020 PT4 will move past the Earth and the Moon, in what Nasa is also describing as a “near-Earth” approach.

This asteroid is much smaller than 2010 FR but is travelling even faster, at a speed of seven miles per second.

This space rock will also pass much closer to the planet, about 4.9 times the distance between the Earth and the Moon, which is just over one million miles away.

The asteroid is about the length of two lorries, and although that seems big, if it collided with Earth at any point in the future, it would probably explode in the atmosphere causing minimal damage.

Meanwhile just last month, Nasa missed a car-sized asteroid that flew past the planet – it was the closest near miss with a space rock ever recorded.

Although some asteroids get a little too close for comfort, Nasa says it’s a perfect time to study parts of the solar system that have remained relatively unchanged for billions of years.

“NEOs (Near-Earth Objects) are comets and asteroids that have been nudged by the gravitational attraction of nearby planets into orbits that allow them to enter the Earth’s neighbourhood,” Nasa says.

“The scientific interest in comets and asteroids is due largely to their status as the relatively unchanged remnant debris from the solar system formation process some 4.6 billion years ago.”

Explaining the formation of planets such as Earth and Mars, Nasa says “today’s asteroids are the bits and pieces left over”.