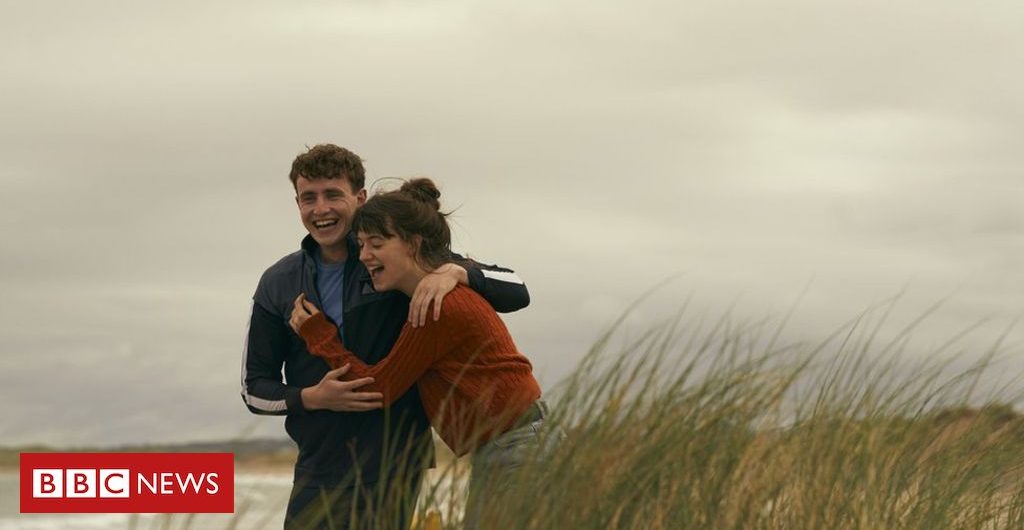 It is a very common reaction to be nervous when you hear your favourite book is being turned into a TV show.

This week, fans of Sally Rooney’s hit book Normal People will be able to see it on screen for the first time.

Sally has said she “couldn’t be happier” with the casting of Daisy Edgar-Jones and Paul Mescal as Marianne and Connell.

She has co-written the episodes and been one of the executive producers for the show.

The book has sold more than 500,000 copies in the UK and famous fans include Sarah Jessica Parker, Kaia Gerber and Florence Welsh.

If you don’t know the story it follows the on-again and off-again relationship between Marianne and Connell which starts while they are still at school.

Connell is popular while Marianne is more of a loner and they keep their relationship a secret.

However, the tables turn when they head to university and Marianne becomes more confident and more popular than Connell.

“It is really a simple story,” Daisy tells us.

“That is why it is so wonderful and powerful for people to read, because it’s so easy to relate to.

“All of the massive life changing moments for Marianne and Connell happen in Marianne’s bedroom or the library.

“There isn’t any kind of over done drama or romance to it, is just two people who really love each other really.”

Both Daisy and Paul know these are big roles to take on. They are fans of the book and feel they know the characters in their heads.

Marianne is smart and unafraid but still cuts a lonely figure at school while Connell is charming and slightly shy, which is not too far removed from how Paul appears in real life.

“I think it’s a testament to Sally’s writing that you can’t help but feel that you have ownership of the characters,” Daisy says.

“But this is a different way of telling the story because what is going on in their heads has to be projected in a more visual way.

“I know that people are going to say ‘Marianne didn’t have a fringe’. Maybe she didn’t? But she did in my head.”

“A lot of the time they don’t understand what each other is feeling,” adds Paul.

“And that’s the point of the novel, that they’re miscommunicating or they’re not fully understanding each other and I think that’s very exciting to get to play.”

It’s Paul’s first TV role. He says having the author on set and heavily involved was incredibly helpful but also slightly intimidating.

“I think when you meet somebody at the top of their game in any shape way or form it’s terrifying,” he says.

“I met her for a coffee after we had been cast, I was as nervous as when I auditioned for the part.

“She knows Connell better than I ever will, but she has an amazing way of just putting you at ease and giving you her blessing.”

Something you might not know is that Sally Rooney, who is 29, made two playlists on Spotify, one for Connell and one for Marianne.

Connell’s includes tracks from Drake, Bon Iver and Frank Ocean while Marianne’s is mostly indie music like The Cranberries and Vampire Weekend.

Paul says he knew some writers make these sorts of playlists for their characters, so he went searching and came across them.

“It was such a privilege to find the music that Sally had in her brain when she was making the characters.

“It’s obviously going to inform you because music sets up the atmosphere in your own imagination so vividly.”

In a strange way, lockdown is actually a good time to release a new television show as we all have more time on our hands.

But that doesn’t take away from the fact that instead of chatting to Daisy and Paul in a fancy hotel room, we are on Zoom with Daisy in her bedroom and Paul in his lounge.

While they both are relatively unknown at the moment, by the time the lockdown is lifted – whether Normal People’s 12 episodes have all been shown or not – it could be a very different story.

“I don’t think it will change at all,” laughs Daisy.

“It is really surreal to be talking about Normal People in the midst of all this madness.

“I don’t know if anything will really change in my daily life and I do hope people watch it. I do hope they like it.”

Normal People starts on BBC One and BBC Three from 26 April.