Bunkers, tents and storage units for military hardware are visible in an area where last month there were none.

Fighting between the nuclear-armed powers over their disputed frontier has prompted alarm. Chinese casualties were also reported but not confirmed.

The latest images were published as the sides hold talks to defuse tensions.

The fresh satellite images, dated 22 June, are from space technology company Maxar. The structures which appear to have been built by China overlooking the Galwan River were not visible in aerial photographs earlier in June, Reuters reported.

Neither India nor China has commented.

The clash in the Galwan Valley, in the disputed Himalayan territory of Ladakh, took place on 15 June, weeks after high-level military commanders from both nations agreed to “peacefully resolve the situation in the border areas in accordance with various bilateral agreements.”

Since the clash, and amid spiralling rhetoric, the two nations have tried to publicly calm tensions.

A statement released by the India’s foreign ministry on Wednesday said that India’s Foreign Minister Subrahmanyam Jaishankar and the Chinese Foreign Minister Wang Yi “reaffirmed that both sides should sincerely implement the understanding on disengagement and de-escalation that was reached by the senior commanders on 6 June”.

In_pictures What do the images show?

Ajai Shukla, a leading Indian defence analyst, tweeted that “there is a large Chinese camp in the Galwan Valley, 1.5km into the Indian side of the LAC [Line of Actual Control]”. 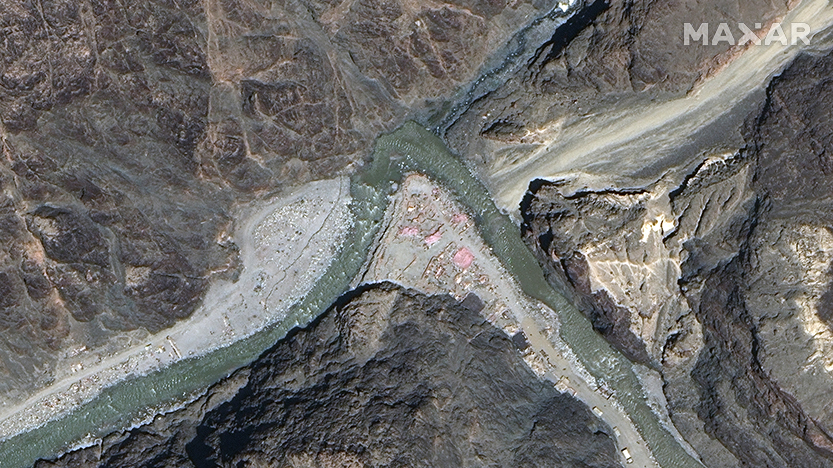 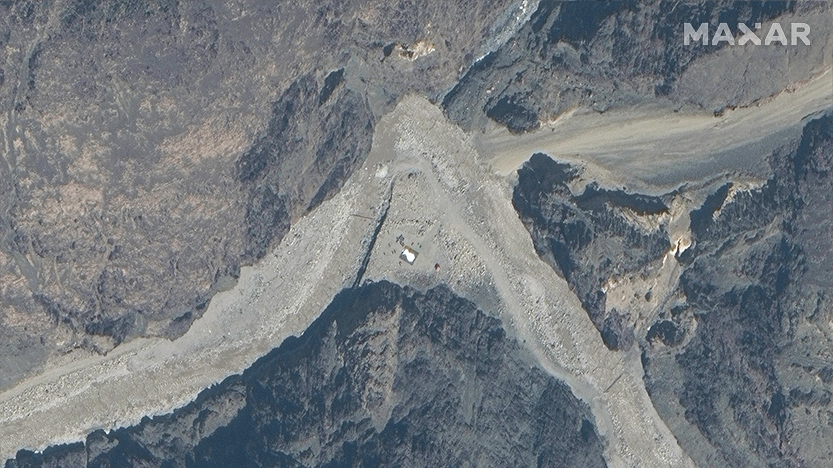 Local media have also quoted sources in the Indian army as saying that the additional build-up by China seemed to have taken place between the 15 June clash and commander-level talks prior to that.

Satellite imagery from May shows no structures in the disputed area near where the clashes took place.

“The [Indian] government has not released any pictures or made a statement, so it’s hard to assess. But the images released by private firms show that the Chinese have built infrastructure and have not retreated,” he said.

The clash presents Indian Prime Minister Narendra Modi with one of his biggest foreign policy challenges as he faces accusations his government was ill-prepared. Last Friday he sought to downplay what happened, denying there had been any Chinese incursion into Indian territory.

But his comments were at odds with remarks from his foreign minister who had earlier accused China of seeking “to erect a structure in Galwan Valley on our side of the LAC”.

While the violence has been big news in India, it has been little discussed in China, and Beijing has given very little detail of what happened.

“I think the two countries can manage the situation and solve the problems peacefully.”

In_pictures What happened in the Galwan Valley?

Media reports said troops clashed on ridges at a height of nearly 4,300m (14,000 ft) on steep terrain, with some Indian soldiers falling into the fast-flowing Galwan river in sub-zero temperatures.

At least 76 Indian soldiers were reportedly injured in addition to the 20 dead. China has not released any information about Chinese casualties.

The fighting took place without any firearms because of a 1996 agreement barring guns and explosives from the area.

In_pictures How dangerous is the standoff?

The situation in the region is described as still very tense.

The Line of Actual Control, as the disputed border between the two nations is known, is poorly demarcated. The presence of rivers, lakes and snowcaps means the line can shift.

The soldiers on either side – representing two of the world’s largest armies – come face to face at many points. India has accused China of sending thousands of troops into Ladakh’s Galwan valley and says China occupies 38,000sq km (14,700sq miles) of its territory. Several rounds of talks in the last three decades have failed to resolve the boundary disputes.

The two countries have fought only one war so far, in 1962, when India suffered a humiliating defeat.

In May, dozens of Indian and Chinese soldiers exchanged physical blows on the border in the north-eastern state of Sikkim. And in 2017, the two countries clashed in the region after China tried to extend a border road through a disputed plateau, Doklam.

Tensions have also risen over a road built by India in Ladakh.

There are several reasons why tensions are rising now – but competing strategic goals lie at the root, and both sides blame each other.

India’s new road in what experts say is the most remote and vulnerable area along the LAC in Ladakh. The road could boost Delhi’s capability to move men and materiel rapidly in case of a conflict.

Analysts say India’s decision to ramp up infrastructure seems to have infuriated Beijing.