Environment Coronavirus: Swiss Alps yearn for the sound of tourists

As cases of Covid-19 start to fall across Europe, lockdowns are being relaxed and more travel is being permitted. That’s a relief for alpine tourist resorts, which were forced to close down right in the middle of the ski season.

This weekend Switzerland’s mountain railways and cable cars can start running again. In Grindelwald, home of the Eiger and the world famous Jungfrau “top of Europe” railway – altitude 3,454m (11.332ft) – this is very good news.

The Konzett family have been running the Kreuz and Post hotel in Grindelwald for four generations. When the Swiss government declared a state of emergency in March, ordering the closure of schools, restaurants, bars and all the ski slopes, their business melted away.

“It was a big shock,” says hotel manager Benjamin Konzett. “The bookings we had… we lost them within one day, basically.”

“We’ve had this hotel since 1886, and to find a similar situation to now, we would have to go back to the Second World War, when everything was closed.”

Environment How railways are sending an important signal

Grindelwald’s director of tourism, Bruno Hauswirth, believes the re-opening of the mountain railways is the key to bringing tourists back. After all, more than a million people took the train up to the Jungfrau last year alone. 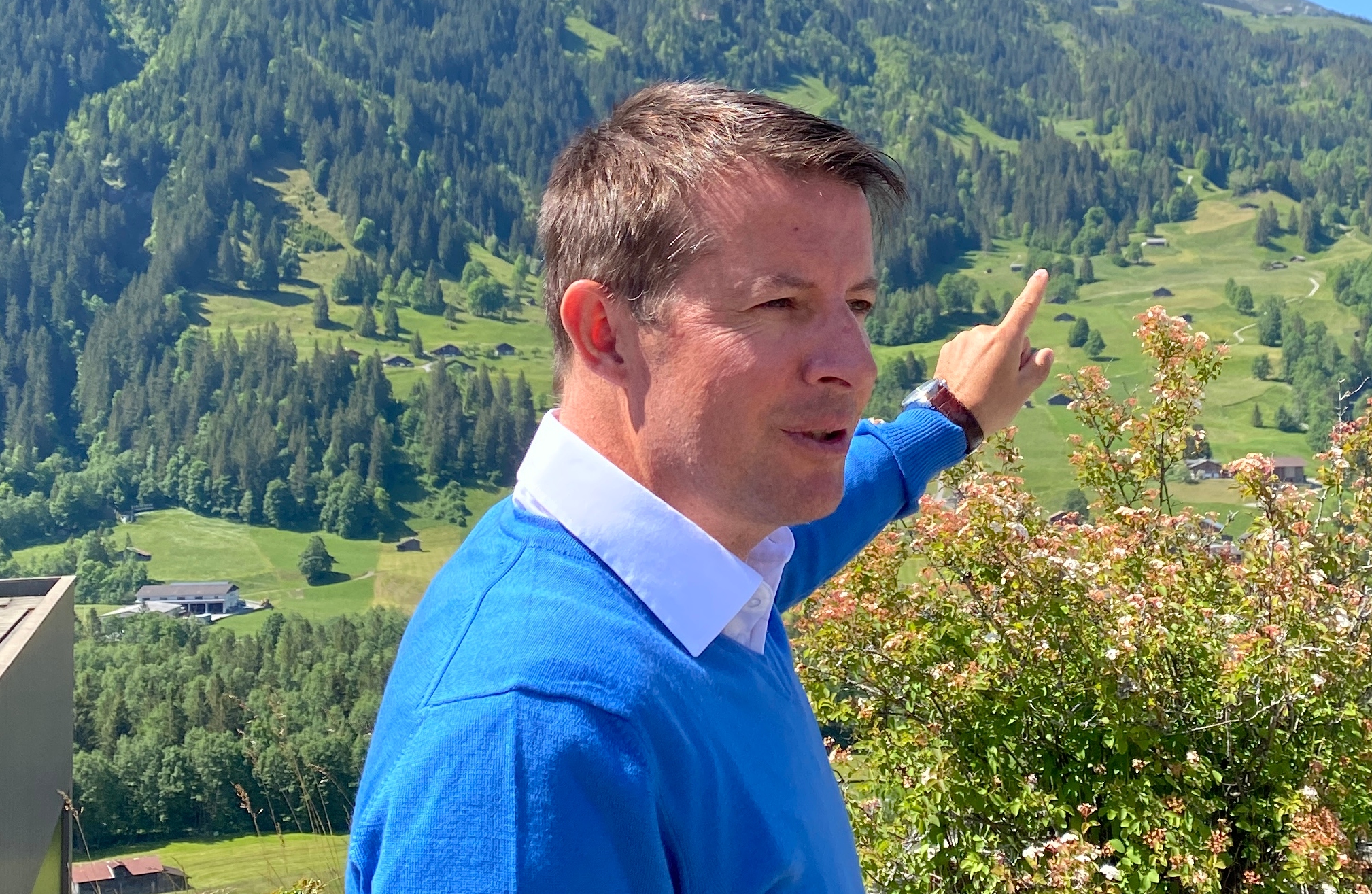 The signal is important, to show that the whole system, the whole tourism chain, is working again

But how to ensure the visitors, eager to wonder at the north face of the Eiger, or get within touching distance of the glaciers, stay safe in the rack railways or cable cars taking them up there?

The Swiss government’s advice on maintaining a two-metre distance from others still stands.

Kathrin Naegeli of Jungfrau Railways admits there are no plans to reduce occupancy. “Everybody who wants to board a train can board a train,” she explains.

“But, we say, if you can’t keep the distance of two metres you should wear a mask. We hope people will take them with them but we will also sell them at the stations, and our people working in the trains will all wear masks as well.”

These are the same measures put in place across Swiss public transport with one slight difference. On Switzerland’s high-speed intercity trains you cannot open the windows. On the mountain railways, and in the cable cars, you can.

Environment How alpine resorts were caught up in Europe’s pandemic

Nevertheless, the alpine communities know there will be questions about the safety of crowded cable cars.

Popular ski resorts like Ischgl in Austria and Verbier in Switzerland are believed to have had high infection rates in February and March. As skiers returned home, they carried the virus across Europe.

So alarmed were doctors in Verbier that they asked the government to quarantine the entire town. By that time, however, Switzerland was already locking down.

No-one really knows yet how the normally crowded après-ski bars and discos will function in winter. As for the ski lifts, Kathrin Naegeli says “we will see in summer and autumn how things work in the trains and the cable cars, and perhaps we will adapt for winter”.

Environment How resorts hope to promote a healthy environment

When the Alps first became a popular holiday destination in the 19th Century, their natural beauty and clean environment were key attractions.

UK tour operator Thomas Cook at the time marketed villages like Grindelwald as places where minds and bodies could recuperate.

The Konzett family hotel opened in 1886 to cater for people wanting a healthy break away from the crowded, smoky cities.

Now Benjamin Konzett is returning to that concept. The pandemic, he says, allowed him to spend more time appreciating the environment he grew up in.

“During the lockdown everything was fresh with spring, the mountain tops were still covered with snow, and we used the time to go back to nature a bit with the family.”

He has even, he explains, been preparing some alpine delicacies for the longed-for summer guests. “I collected cowslips and elderflowers to make ice cream for the summer.”

Now he hopes tourists will forget about their winter pandemic worries and choose the Alps to recover from the stress and fear of the last three months. “The whole world meditated during this lockdown and we found out that nature is stronger than mankind.”

But the Alps will face fierce competition from Greek islands and Spanish beaches. Tourist resorts across Europe are all trying to salvage at least something from the summer season.

In Grindelwald, where over 30% of guests come from Asia, Bruno Hauswirth knows this summer won’t be as good as the last few years.

“But that means nearly 70% come from Europe, so we are quite confident,” he says.

The three-month lockdown gave Grindelwald a chance to reflect on exactly where its strengths lay, he believes: real mountains like the Eiger along with “very intact nature, perfect air and clean water”.

Environment How are other European countries doing it?