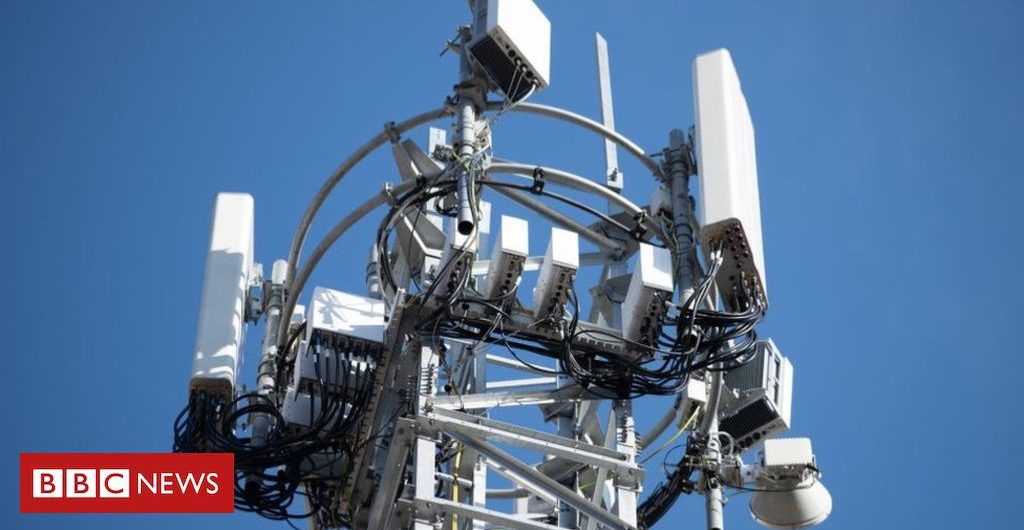 The UK’s mobile networks have reported a further 20 cases of phone masts being targeted in suspected arson attacks over the Easter weekend.

Trade group Mobile UK said it had been notified of incidents in England, Wales and Scotland.

One of the targeted sites provides mobile connectivity to a hospital in Birmingham.

The figure represents a lower incidence rate than had been the case the previous weekend.

Mobile UK added it had received no reports of staff being targeted over the period.

Attacks on 5G masts pre-date the coronavirus pandemic. But there are concerns a surge in the amount of vandalism has been caused by conspiracy theories, which falsely claim the deployment of 5G networks has caused or helped accelerate the spread of Covid-19.

“Theories being spread about 5G are baseless and are not grounded in credible scientific theory,” said a spokesman for Mobile UK.

“Mobile operators are dedicated to keeping the UK connected, and careless talk could cause untold damage.

“Continuing attacks on mobile infrastructure risk lives and, at this challenging time, the UK’s critical sectors must be able to focus all their efforts on fighting this pandemic.”

The chief executive of Vodafone UK added that one of the targeted sites serves Birmingham’s Nightingale hospital.

“It’s heart-rending enough that families cannot be there at the bedside of loved ones who are critically ill,” wrote Nick Jeffrey on LinkedIn.

“It’s even more upsetting that even the small solace of a phone or video call may now be denied them because of the selfish actions of a few deluded conspiracy theorists.

“Imagine if it were your mum or dad, your gran or grandad in hospital. Imagine not being able to see or hear them one last time. All because you’ve swallowed a dangerous lie.”

The minister for digital infrastructure had earlier described such attacks as being “irresponsible and idiotic”.

On Monday, he had cast doubt on media reports which had explicitly refuted the myth that the two are linked.

But this morning, he clarified his position saying: “There is no connection between the present national health emergency and 5G, and to suggest otherwise would be wrong and indeed it could be dangerous.”

There have also been reports of potential cases since the Easter break.

Three men have been arrested on suspicion of arson after a phone mast was on fire in Dagenham, Essex.

The Met police told the Barking and Dagenham Post: “Some evacuations were carried out as a precaution, but residents have since been allowed to return to their homes. There are no reports of any injuries.”

Police in Huddersfield have also said they are trying to determine exactly how a phone mast came to be on fire in the early hours of this morning.

Recent attacks on telecoms infrastructure have not been limited to the UK.

On Saturday, the newspaper De Telegraaf reported there had been four incidents in the Netherlands over the previous week. It said in one case, arsonists had left an anti-5G slogan painted on the damaged equipment.

There have also been reports of a suspected case in Ireland, where two masts caught fire on Sunday. Network provider Eir said the affected infrastructure was not being used for 5G, but was being upgraded to boost 4G coverage for a nearby hospital and the surrounding area.

Conspiracy theories linking 5G signals to the coronavirus pandemic continue to spread despite there being no evidence the mobile phone signals pose a health risk.

One falsely suggests 5G suppresses the immune system, the other falsely claims the virus is somehow using the network’s radio waves to communicate and pick victims, accelerating its spread.

While 5G uses different radio frequencies to its predecessors, it’s important to recognise that the waveband involved is still “non-ionising”, meaning it lacks enough energy to break apart chemical bonds in the DNA in our cells to cause damage.

Earlier this year, scientists at the International Commission on Non-Ionizing Radiation Protection completed a major study of related research into the topic.

While it recommended slightly tighter limits on the transmitting capabilities of handsets themselves to minimise any chance of damage caused by human tissue being heated, its key finding was that there was no evidence that either 5G networks or earlier systems could cause cancer or other kinds of illness.

The second theory appears to be based on the work of a Nobel Prize-winning biologist who suggested bacteria could generate radio waves.

But this remains a controversial idea and well outside mainstream scientific thought. In any case, Covid-19 is a virus rather than a bacteria.

There’s another major flaw with both these theories. Coronavirus is spreading in UK cities where 5G has yet to be deployed, and in countries like Japan and Iran that have yet to adopt the technology.