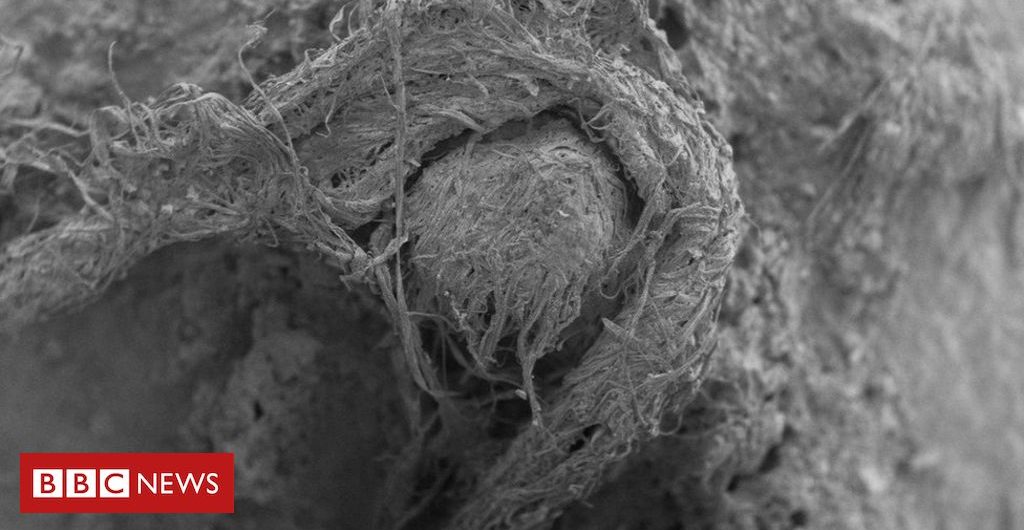 A piece of 50,000-year-old string – the oldest yet discovered – found in a cave in France has cast further doubt on the idea that Neanderthals were cognitively inferior to modern humans.

A study published in Scientific Reports said a tiny, three-ply cord fragment made from bark was spotted on a stone tool recovered from the Abri du Maras.

It implies that Neanderthals understood concepts like pairs, sets and numbers.

Twisted fibres provide the basis for clothes, bags, nets and even boats.

Neanderthals – whose species died out about 40,000 years ago – are already known to have made birch bark tar, art and shell beads.

They also controlled fire, lived in shelters, were skilled hunters of large animals and deliberately buried their dead in graves.

Typically, archaeologists and paleoanthropologists only find faunal remains or stone tools at sites like the Abri du Maras. Perishable materials are usually missing.

But a team of researchers from France, the US and Spain discovered a fragment of cord adhering to the underside of a 60mm- (2.4-inch-) long stone tool.

The cord, believed to have been made with the inner bark of a conifer tree, was approximately 6.2mm long and 0.5mm wide.

Three groups of fibres were separated and twisted clockwise in an “S-twist”. Once twisted, the strands were twined anti-clockwise in “Z-twist” to form a cord.

The study – whose lead author was Bruce Hardy of Kenyon College in Ohio – concluded that the production of the cord demonstrated that Neanderthals had a detailed ecological understanding of trees and how to transform them into entirely different functional substances.

The production of the cord also implied a cognitive understanding of numeracy and context-sensitive operational memory, according to the study. That is because it required keeping track of multiple, sequential operations simultaneously.

“Given the ongoing revelations of Neanderthal art and technology, it is difficult to see how we can regard Neanderthals as anything other than the cognitive equals of modern humans,” the study said.