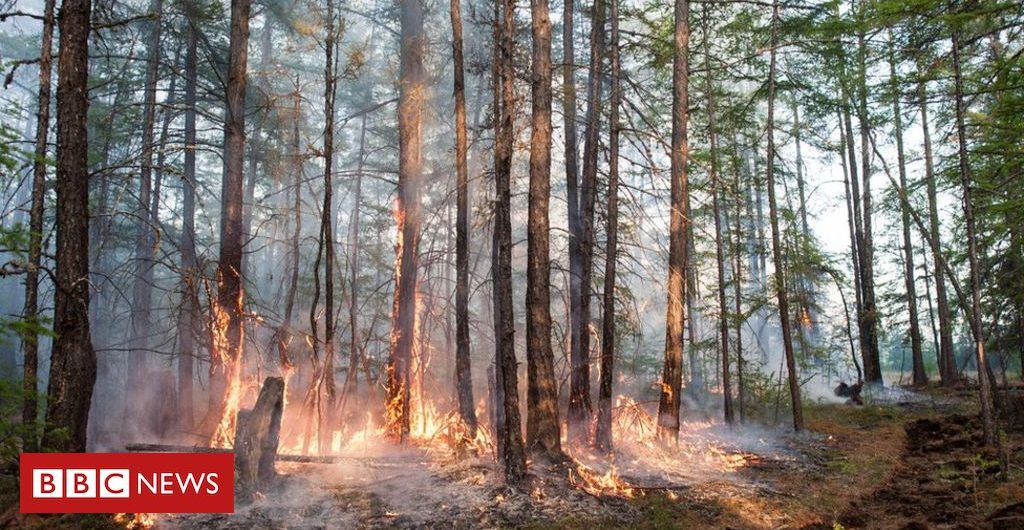 Temperatures in the Arctic Circle are likely to have hit an all-time record on Saturday, reaching a scorching 38C (100F) in Verkhoyansk, a Siberian town.

The record still needs to be verified, but it appears to have been 18C higher than the average maximum daily temperature in June.

Hot summer weather is not uncommon in the Arctic Circle, but recent months have seen abnormally high temperatures.

The Arctic is believed to be warming twice as fast as the global average.

Verkhoyansk, home to about 1,300 people, sits just inside the Arctic Circle, in remote Siberia. It has an extreme climate with temperatures plunging in January to an average maximum of -42C and then surging in June to 20C.

But a persistent heatwave this year in the Arctic Circle has worried meteorologists. In March, April and May, the Copernicus Climate Change service reported that the average temperature was around 10C above normal.

Earlier in June, parts of Siberia recorded 30C, while in May, Khatanga in Russia – situated in the Arctic Circle at 72 degrees north – set a new May temperature record of 25.4C.

“Year-on-year temperature records are being broken around the world, but the Arctic is warming faster than anywhere else on Earth,” said Dr Dann Mitchell, associate professor in atmospheric science at the University of Bristol. “So it is unsurprising to see records being broken in this region. We will see more of this in the near future.”

Science Is this evidence of climate change?

Heatwaves in the Arctic aren’t unusual. Weather patterns around the world can align in such a way that hot air is transported quite far northward and colder air from the poles southward.

Over the last few months a large area of high pressure in eastern Russia has been dominant. This has led to southerly winds bringing warmer air from near the tropics, leading to higher than average temperatures.

However, the persistence of this weather pattern has led to a longevity and scale of heat that is worrying. This is consistent with what climatologists believe will happen in the Arctic with climate change.

Most scientists agree that over the past 30 years, the Arctic has warmed at a rate of twice the global average.

The graphic below shows that across the globe, through the period 1960-2019, average air temperature has generally increased by around 1C.

However, as you head closer to the North Pole – latitude 90° – the reds become darker. This shows how the temperature has increased here more than anywhere else – by around 4C.

Science Why should we be worried about warming in the Arctic?

Warming in the Arctic is leading to the thawing of once permanently frozen permafrost below ground.

This is alarming scientists because as permafrost thaws, carbon dioxide and methane previously locked up below ground is released.

These greenhouse gases can cause further warming, and further thawing of the permafrost, in a vicious cycle known as positive feedback.

The higher temperatures also cause land ice in the Arctic to melt at a faster rate, leading to greater run-off into the ocean where it contributes to sea-level rise.

There is also an element of positive feedback here, says BBC Weather, because the loss of highly reflective white ice means that the ground and sea absorb more heat. This leads to more warming.

The impact of wildfires are also a consideration. Last summer, they ravaged parts of the Arctic. Although they are common in summer, high temperatures and strong winds made them unusually severe.

They typically start in early May before peaking in July and August but by late April this year they were already ten times bigger in the Krasnoyarsk region of Siberia compared to the same time last year, Russia’s emergencies minister said.

Well, 2020 is certainly shaping up to be a contender.

The Met Office, the UK’s national weather service, reckons there’s a 50:50 chance it’ll be the hottest year ever recorded.

Much of northern Europe and Asia has had an exceptionally mild spring and early summer with temperatures 10C higher than normal in some areas.

The hottest year to date is 2016. It is still a nose ahead, but the margins are “very close”.

Of course, this should come as no surprise.

“This is a warning message from the Earth itself,” he tells me. “We ignore it at our peril.”