“How could I be an alcoholic? I’m not that guy with the brown paper bag.”

Both drank heavily during their careers before seeking help for alcoholism in retirement.

They want to raise awareness and educate others, inside and outside sport, to prevent more people suffering.

“I just feel a duty to be honest,” said Thomas, who retired in 2012 following a heart attack while training with the Scarlets.

After a quadruple bypass operation he was put on a transplant waiting list, fitted with a pump to help reduce his pulmonary hypertension and forced to limit all fluids to two and a half litres, or less than four and a half pints a day.

“Things got pretty drastic and in my state, you know, where I’m on a heart transplant list and I’m drinking to those levels with a wire coming out of my stomach, which if it gets pulled would almost certainly kill me,” the 38-year-old added.

The prop forward, from Newport, said he struggled to cope with the loss of his sport, career and health.

“I’d wake up in the morning and have like a little 200ml glass of water… and then go out for the day and have no mixers because I had to have it straight because there was extra fluid… and to me at the time, it seemed completely acceptable, but I mean, this was insanity”.

The Johannesburg-born father-of-four said he would have “panic attacks, where I thought I was having another heart attack, but all self-induced – like this did not have to happen”.

Thomas, who has been sober for a year, said he was speaking out now to try to educate others about the disease.

He said he had had an “amazing” rugby career and incredible amounts of fun but had he been better educated and informed about mental health and addiction the outcome may have been different.

He added there had been an improvement in sport, with support put in place, but he wants to share his story in the hope of helping others.

“I was on my own in that cell thinking about the highs of my career, standing on the podium listening to the national anthem, to sitting in that cell for stealing alcohol – it’s quite a big come down.”

When Pearce turned professional at 18 he soon learnt he got paid the same money whether he won or lost and fighting soon became a means to help him drink.

“That’s when things started to slide – the realisation that I could turn up, not really try, get paid and then go out with my friends again”.

The 33-year-old’s career soon slipped away and he found himself in a small flat in his hometown of Welshpool, Powys, drinking bottles of vodka every day.

“When the money did dry up I ended up going to my local shop, stealing alcohol just to fund my habit, I got caught and consequently I was arrested”. 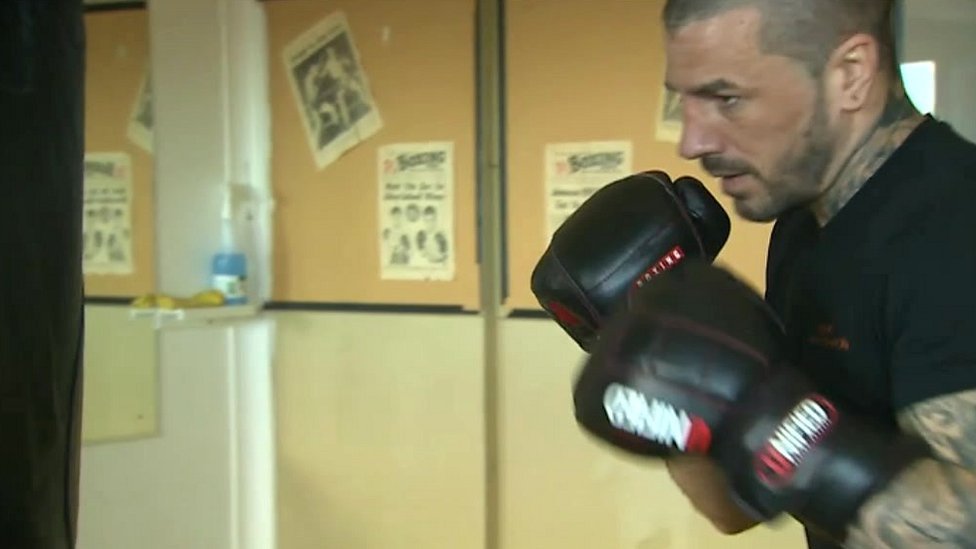 If someone had asked me, when I was boxing, who do you turn to if you think you’ve got a drink problem, or any addiction, I wouldn’t have had a clue

While in a prison cell, he was visited by someone from the drugs and alcohol charity Kaleidoscope who helped him turn his life around.

The retired boxer is now a support worker for the charity, and will be three years sober next month.

Pearce added he feels there is extra pressure in high-level sport which may prevent some athletes from seeking help if they know where to get it.

“There’s not enough awareness around addiction. If someone had asked me when I was boxing, who do you turn to if you think you’ve got a drink problem, or any addiction, I wouldn’t have had a clue”.

Environment ‘All walks of life’

A study co-written by researchers at Swansea University in 2017 suggested the prevalence of substance abuse in sport posed a heightened risk of addiction for people who are already vulnerable.

It found the competitive culture and demands of sport, as well as the end of a sporting career, can create an environment where abuse and addiction develops.

Sian Edwards, involved in postgraduate research into addiction in sport, believes there is still a lot of stigma and shame which can make it difficult for people to talk about.

The Cardiff Metropolitan University PhD student said most people did not understand addiction.

She added sport and alcohol often went hand in hand but it could often mask the warning signs of addiction.

“It can sometimes be difficult to see how someone can be addicted if at the same time they can go out onto the rugby pitch or into the boxing ring, or whatever sport it might be and go and perform in a way that most people could never do”.