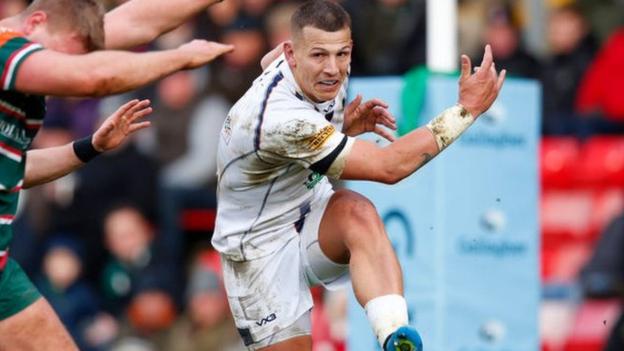 Wasps are to sign centre Ryan Mills from Midlands rivals Worcester for the 2020-21 season.

Warriors have mutually agreed to release the ex-Gloucester player, 27, from the final year of his contract.

Injuries have limited Mills, who can also play fly-half, to 69 Premiership appearances in six seasons at Sixways, in which he has scored eight tries.

“I feel like it’s time for a fresh environment and a new exciting challenge,” said Mills.

“Wasps are a club drenched in history and one that I have always been drawn towards, largely due to the attacking, exciting style of rugby.

“I’ve already got some good friends at the club like Dan Robson, and have played with a few others in various teams, like Thomas Young at Gloucester and Josh Bassett and Joe Launchbury in the England age groups. So, I know the quality of player and personnel that I’ll be joining.

“I’d like to pay a special thanks to the Warriors players, staff and fans for their tremendous support over the past six years. I don’t regret a second of my time at the club. It was extremely difficult at times but also equally rewarding coming through some of the testing times.”

Mills becomes the first signing made by Wasps since the departure last month of long-serving director of rugby Dai Young.

“Ryan is someone we’ve had our eye on for a while,” said Wasps interim head coach Lee Blackett. “He’s an established Premiership player who is unlucky to have not picked up any international caps.

“Hopefully we can help him achieve that ambition. He has the ability to unlock defences and plays a strong kicking game, while he is a proven leader.”

Warriors director of rugby Alan Solomons added: “Ryan has been a great servant of the club and he has made an invaluable contribution over many years.

“Warriors have reached a point where we have outstanding young home-grown centres coming through in Ollie Lawrence and Will Butler and experienced internationals such as Ashley Beck and Francois Venter. With that in mind there has been a consensus that the time is now right for Ryan to experience that different challenge.”