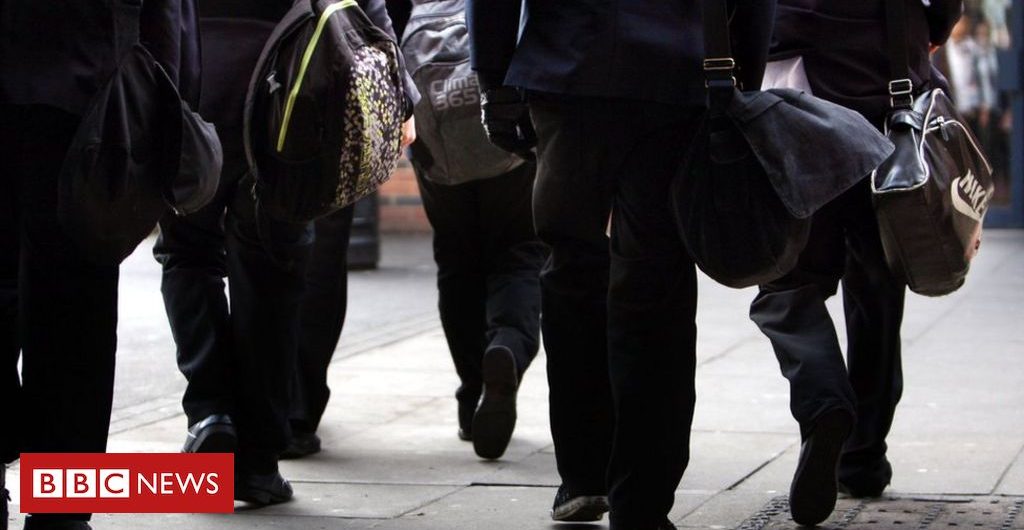 Underachievement in education has remained “entrenched” in Northern Ireland, despite significant funding and policies to tackle it.

That is according to Education Minister Peter Weir.

The minister has announced an expert panel to come up with recommendations to tackle educational underachievement.

Mr Weir also said that any extra money for schools to reopen at the end of August would have to come from the executive.

On Monday, the Republic of Ireland announced an extra €375m (£342m) of funding to help schools fully reopen.

Speaking in the assembly, Mr Weir said that underachievement was a particular problem among Protestant boys from disadvantaged backgrounds, although it also affected many Catholic children.

Fewer than half of children entitled to free school meals left school with at least five GCSEs at grades A* to C, including English and Maths, in 2017/18.

By contrast, almost 80% of pupils not entitled to free school meals left school with at least those qualifications.

In the ‘New Decade, New Approach’ agreement there was a requirement that: “The executive will establish an expert group to examine and propose an action plan to address links between persistent educational underachievement and socio-economic background, including the long-standing issues facing working-class, Protestant boys”.

That expert group has now been established by the Department of Education (DE).

It has six members and will be chaired by Dr Noel Purdy from the Centre for Research in Educational Underachievement (CREU) at Stranmillis University College.

However, it also said that academic selection had significant social, educational and economic consequences for pupils.

Other studies into the relationship between deprivation and educational achievement have also been critical of academic selection.

However, a number of other factors have also been identified which can lead to young people not fulfilling their potential at school.

These include inadequate support from parents, low expectations from some teachers and schools and insufficient support for students with special educational needs (SEN).

The expert panel is expected to come up with practical recommendations to tackle underachievement and produce a final report and action plan by the end of May 2021.

Mr Weir said it would also produce a budget for the action plan.

“This panel has the potential to significantly improve the outcomes for thousands of children and young people in Northern Ireland,” he said.

“As President Ronald Reagan once said: ‘There are no easy answers, but there are simple answers. We must have the courage to do what we know is morally right’.”

Sinn Féin MLA John O’Dowd asked Mr Weir whether the panel would be allowed to examine the implications of academic selection on educational underachievement.

But Mr Weir responded that the “obsession” with transfer tests as being critical to underachievement “massively misses the point”.

“It creates both a distraction and also actually I think focuses in, largely speaking, on the wrong issue.”

The minister said that academic selection could be looked at as part of a forthcoming wider review of the education system also promised in the New Decade, New Approach deal.

Mr Weir was also asked by SDLP MLA Daniel McCrossan if schools would receive extra funding to enable them to reopen to all pupils at the end of August.

On Monday, the Irish government said it would fund an additional 1,000 post-primary teachers, some new school premises to allow for social distancing and 120 extra counselling posts to help students adjust to a different educational environment.

But Mr Weir said that any extra money for similar measures for schools in Northern Ireland would have to be allocated by the executive.

“If additional money is to be put in, it needs to be supplied centrally by the executive,” he said.

“If it’s anywhere within the ballpark of what has happened in other jurisdictions, that will need to be something that is done.

“I’m committed to arguing that case, albeit that there will be very many competing demands I suspect of whatever budgets are available to the executive.”