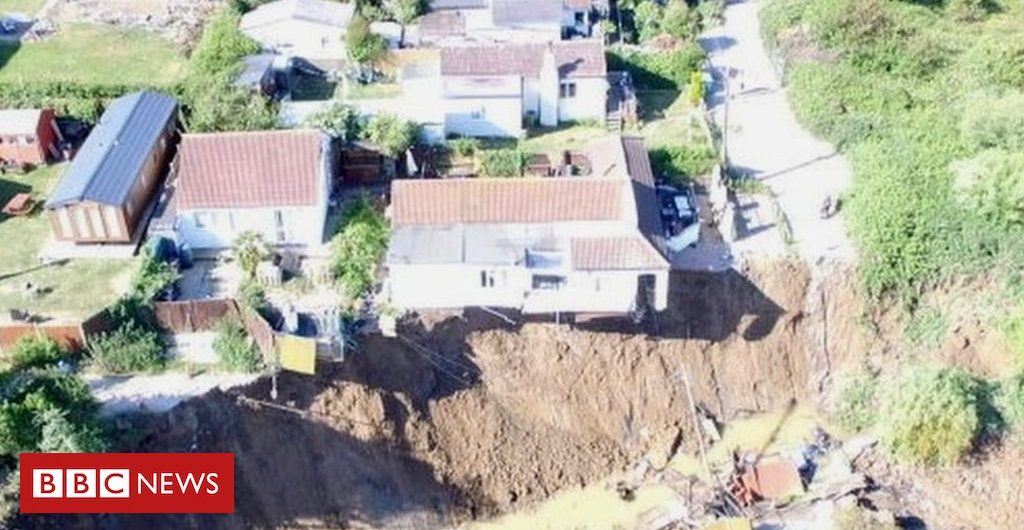 A cliff fall that led to 20 homes being evacuated has worsened with a large section of ground giving way.

A house in Surf Crescent, Eastchurch, Kent, is partially suspended over the edge, while a car and garage fell down the cliff face on Sunday morning.

The family left the property after a smaller collapse on Friday.

“They are just waiting for the house to fall,” said neighbour Malcolm Newell, who has been told it is not safe to return to his home two doors away.

A swimming pool in the property’s back garden is also at risk, Mr Newell said, adding: “If that goes it could take a lot more with it.”

Kent Fire and Rescue Service said it was called at 07:00 BST to the landfall involving a “significant section of the cliff”, leaving the house “structurally unsafe and at increased risk of collapse”.

It said a “small number” of households had “self-evacuated” and were being looked after by Swale Borough Council at a community centre.

All but two of the households evacuated on Friday were told they could return to their homes on Saturday morning.

It is unclear how many are affected by the second cliff fall, but Mr Newell estimated eight households have been told they can not return.

“I’m out. I can’t go back,” he said. “Apparently there are more cracks appearing along the front.”

Mr Newell, a parish councillor in Eastchurch, said he first warned authorities in 2015 that action was needed to prevent further erosion.

“This should have been dealt with a long time ago,” he said. “It’s not right to have people’s home, their livelihoods, falling into the sea.”

In a statement, Swale Borough Council said it was opposed to the Environment Agency’s existing shoreline management plan, which includes “no active intervention to defend this area”.

However, the Environment Agency said: “The shoreline management plan, which indicates which areas justify continued protection or not, was written in full consultation with Swale Borough Council and other partners.

“These are always difficult decisions, and the plan sets out no further intervention for this area, however we continue to work closely with Swale Borough Council.”

The agency described the area as “mainly rural though includes a small number of houses and caravan parks at risk from ongoing significant erosion”.

In 2015 the agency said it had considered a coastal defence scheme, but the number of properties in the area did not justify the cost.