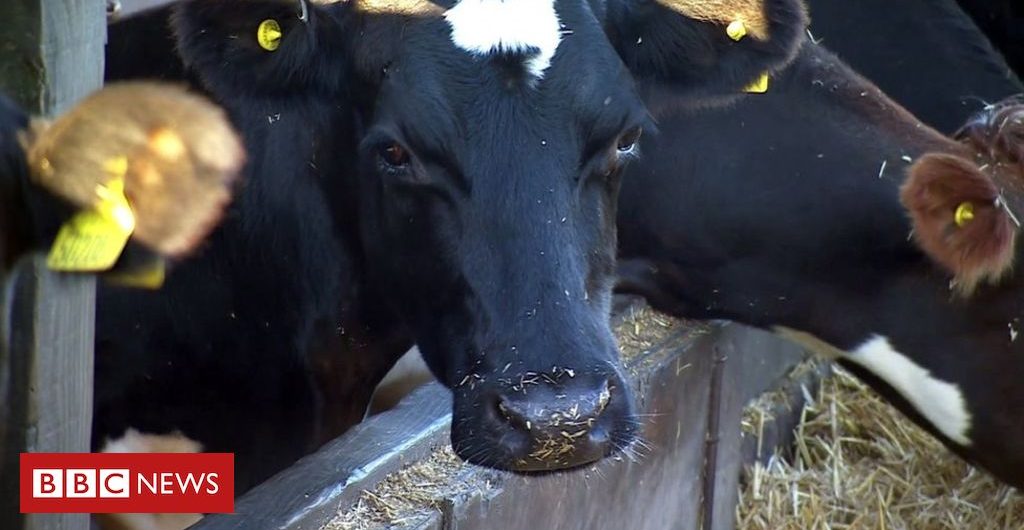 People should cut the amount of beef, lamb and dairy produce they eat by a fifth to combat climate change, a report says.

It says public bodies should lead the way by offering plant-based options with all meals.

But it says if people don’t cut consumption willingly, taxes on meat and dairy might be needed.

The report comes from the government’s official advisers, the Committee on Climate Change (CCC).

Its chief executive Chris Stark told BBC News: “We can’t meet the government’s 2050 Net Zero target without major changes in the way we use the land, the way we farm, and what we eat.”

The farming union NFU welcomed much of the report, although they oppose cuts in livestock – but some environmentalists believe it’s too timid.

The document recommends a host of measures to cut greenhouse gas emissions from the countryside.

Others include increasing UK forestry cover from 13% to at least 17% by 2050, and restoring at least half of upland peat bogs.

But it’s the proposals for reducing consumption of dairy produce and red meat that are likely to draw attention.

The authors say reducing the amount of beef, lamb and dairy we eat by at least 20%, and reducing food waste by 20% would save the equivalent of seven million tonnes of CO2 from farms.

They say land that’s no longer needed for cattle and sheep could support trees crops to burn for energy.

The authors anticipate around a 10% drop in cattle and sheep numbers by 2050 against 2017 levels. They say there’s already been a reduction of around 20% in the past two decades.

Some upland farmers argue that on thin soils, the only productive use of the land is for livestock.

Minette Batters, NFU President said: “Plant-based products do not always necessarily have a lower impact on the environment.

“Of British land, 65% is only suitable for grazing livestock and we have the right climate to produce high quality red meat and dairy. Therefore it makes sense that, when talking about environmental impact, the public continues to support British livestock production.”

The report says: “Grasslands can have a positive impact on soil quality (by storing carbon in the soil) but grassland cannot continuously increase its carbon store.

“This means grassland cannot be used continually to offset methane emissions from livestock.”

The broad-ranging document also says farmers must use fertilisers more intelligently. They should deal with animal manure better, and reduce food waste.

Peatland burning ‘should be banned’

The report urges a ban on regular burning on peatland, and a ban on peat extraction.

Controversially, the committee recommends expanding crops grown to be burned for energy to around 23,000 hectares each year.

This is resisted by food charities such as the Sustain Alliance. Its spokesperson Vicki Hird said: “The emphasis on energy crops to feed power plants is dangerous – it could damage biodiversity and ecosystems as well as our food security.”

New forests could be funded by aviation levies

The Committee says land use – that’s farms, forests and peatland – accounted for 12% of total UK greenhouse gas emissions in 2017.

But by 2050, it says, farmers and land-managers must reduce these emissions by almost two thirds for the UK to meet its targets.

New forests, it urges, should be funded by a levy on greenhouse gas-emitting industries such as aviation.

Increasing forestry, the report says, will provide woods for recreation, clean the air, filter water and capture flood waters on the land.

He said: “The level of ambition is in no way matched to the scale of our climate and ecological emergencies.

“People in the UK are already reducing their red meat consumption.

“A 10% reduction in cattle and sheep numbers by 2050 is likely to be much smaller than the shift that’s going to happen anyway, without the help of the measures the committee proposes.”