Environment Brazil oil spill: Where has it come from?

The source of the oil spill washing up on thousands of kilometres of Brazil’s coastline over the past few weeks remains the subject of a great deal of speculation.

The Brazilian authorities say they have identified a ship they believe might be responsible and are carrying out further investigations.

We’ve been asking experts on shipping routes and the types of crude oil produced in different countries to try to identify the most likely source of the spill.

First detected in early September, crude oil has continued to appear on the beaches and pristine mangroves of north-east Brazil.

Nine states have been cleaning thick sludge from their shores. About 2,000 tonnes of oil have been removed so far.

Environment Where did the oil originate?

Crude oil has very distinct characteristics, depending on its origins.

The Brazilian environment ministry says the oil is not Brazilian and that testing shows that it’s “very likely from Venezuela”. 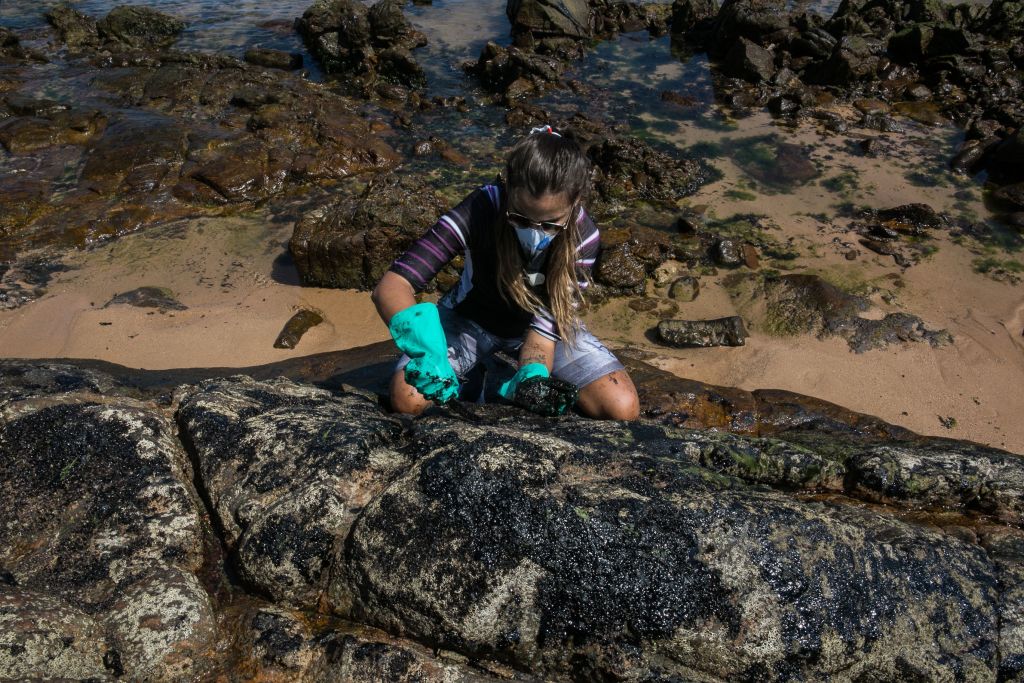 The government of Venezuela says it’s not. So what’s the evidence that it does come from there?

Most of the investigations so far have been carried out by Brazilian organisations. The Federal University of Bahia took samples of oil from beaches in two states.

“Compared with oils from our ‘oil bank’ there is strong similarity with oil produced in the Venezuelan petroleum basin,” says Olívia Maria Cordeiro de Oliveira, director of the university’s Geoscience Institute.

The Brazilian state-run oil company, Petrobras, says it has narrowed down the origins of the oil to three Venezuelan oil fields.

Samples of the crude have also been sent for analysis to laboratories in the United States.

“Oil has a certain set of personalities,” says Christopher Reddy, a researcher working on the analysis.

“Scientists at any mystery spill try to see if there are unique characteristics from a particular type of crude oil.”

The results of these US tests should be known shortly. Tests are also being carried out in Norway and France.

Environment Did it come from an oil tanker?

Some of Venezuela’s crude oil exports go to Europe, but most is shipped to Asia, a route that passes close to the area of Brazil’s coastline affected by the spill.

The Brazilian police now say they have identified a Greek-flagged ship that was carrying Venezuelan crude oil.

Crude oil exports are Venezuela’s most important source of revenue.

In recent months, new, tougher sanctions imposed by the United States have effectively ended US imports of Venezuelan oil.

So, it’s now Asian markets – mainly India and China – which have become Venezuela’s major export destinations, but even these flows have declined significantly over the past year.

Washington has introduced the possibility of secondary sanctions on any company that assists or supports the administration of President Nicolás Maduro, effectively threatening foreign energy companies that do business with Venezuela.

Ships carrying Venezuelan oil have sought to avoid detection by turning off their tracking signals – so-called going dark – to protect their clients from these secondary sanctions, say analysts from the Kpler energy intelligence firm.

Kpler has identified 14 vessels loaded with crude oil from Venezuela since May, which have had their signals switched off for some of their journey.

Brazil has been quick to state that it does not necessarily blame its neighbour for the spill.

One theory is that there was an accident at sea and the ship, possibly with its signals switched off, failed to report it. Venezuela says it has not received any reports of an oil spill from its clients or subsidiaries.

There has also been speculation that the leak came from cargo on a sunken shipwreck.

A third possibility is that the leak came from a ship-to-ship transfer that went wrong.

It’s common for tankers to exchange oil at sea using pumps and pipes. It might only take 30 minutes for 600 tonnes of oil, less than the amount recovered so far, to leak from a ruptured hose during a ship-to-ship transfer.

But without reliable monitoring of shipping locations off the Brazilian coast, it’s very difficult to pin it down to an individual ship or event.

It is often possible to gather vital information about oil spills from satellite imagery.

However, on this occasion, there is little satellite data available with which to identify the source of the spill, says Rob Ayasse from the satellite monitoring firm, Ksat.